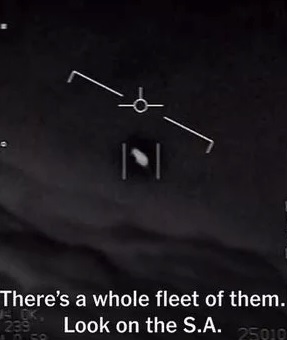 The Paranormal Chronicles UFO news roundup is brought to you by the NEW groundbreaking book on the UFO subject, EVOLUTIONARY METAPHORS. 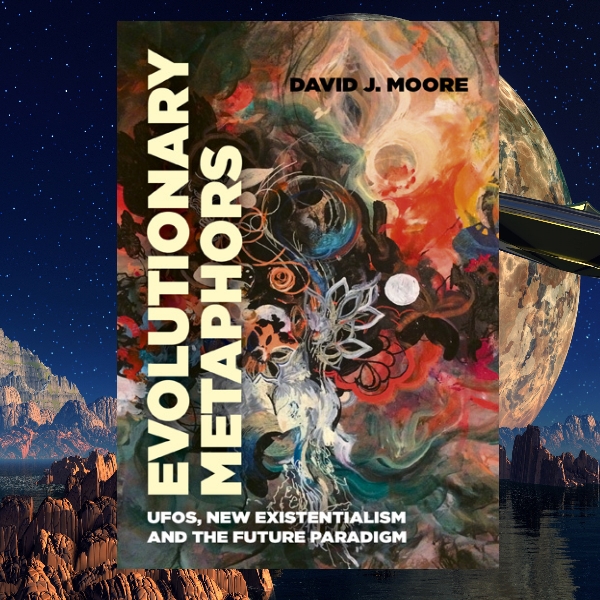 This is the shocking moment when a US Navy pilot encountered a UFO that still remains unexplained, sparking claims of alien contact. The footage, filmed by Navy pilots, saw a bizarre object rotating against the wind. The flying object was one of a “fleet” – although footage of the alleged fleet was not released.

In the article, they say objects were spotted over Eastern seaboard between 2014 and 2015. Pilots said that the UFOs were also able to stop quickly and turn suddenly even against deadly winds. According to this testimony, these UFOs would reach altitudes of up to 30,000ft and flew at hypersonic speeds without leaving any visible engine exhaust.

Lt. Ryan Graves told the NYT that he saw UFOs on an almost daily basis in the airspace off the Eastern seaboard between Florida and Virginia.

Lt. Graves reported what he witnessed to the Pentagon and Congress – but did not receive any explanation. In the shocking footage, the pilot can be heard telling another pilot: “This is a [expletive] drone, bro. There’s a whole fleet of them. Look on the SA. My gosh. They are all going against the wind. The wind is 120 knots to the west. Look at that thing dude. That’s not a [unclear] is it? It’s rotating.”

In 2014, a pilot operating a Super Hornet fighter jet told the NYT that he nearly collided with a UFO. The pilot recalled that a “sphere encasing a cube” flew in between two fighter jets that were flying around 100ft apart from each other.

Another pilot, Lt. Danny Accoin, noticed a flying object on his radar, missile system, and infrared camera, but couldn’t see it in his helmet.

He added: “I knew I had it, I knew it was not a false hit but I could not pick it up visually.”

The former leader of the U.S. government’s top-secret UFO program has stories to tell, and he is sharing some of them for the first time in a new documentary.

Intelligence officer Luis Elizondo served as the former director of the Pentagon’s Advanced Aerospace Threat Identification Program (AATIP), an initiative launched in 2007 to study reports of UFO encounters. Elizondo departed the agency in 2011; in 2017, he spoke with reporters at The New York Times, confirming the existence of the shadowy agency and describing its mission.

Now, Elizondo is pulling back the curtain on his tenure with the AATIP, which he left because of a lackluster official response to the agency’s findings, and their unwillingness to address potential risks from UFOs, according to the new show “Unidentified: Inside America’s UFO Investigation,” premiering May 31 on the History Channel at 10 p.m ET/9 p.m. CT. [UFO Watch: 8 Times the Government Looked for Flying Saucers]

No, there isn’t a big reveal that UFOs were alien spacecraft all along. But delving into long-hidden accounts of UFO investigations will hopefully encourage people — and authorities — to overcome long-standing stigmas and talk more openly about these mysterious aircraft, some of which may pose a bigger threat than we realize, Elizondo told Live Science.

UFOs have perplexed and fascinated people for decades; they also pose a unique challenge to federal agents trying to determine if they represent a threat to national security. Before AATIP, the U.S. Air Force had launched Project Blue Book, which investigated more than 12,000 purported UFO sightings from 1952 to 1969.

During Elizondo’s tenure at AATIP, observers reported UFOs flying at hypersonic speeds — more than five times the speed of sound. Yet there were none of the signatures that usually accompany aircraft flying at such fantastic speeds, such as sonic booms, he said.

The UFOs were also unexpectedly mobile, traveling so fast that they would have experienced gravitational forces, or G-forces, that far exceed the limits of endurance for both humans and aircraft. The F-16 Fighting Falcon aircraft, one of the most maneuverable in the U.S.’s arsenal, reaches its limit at around 16 to 18 G’s, while the human body can withstand about 9 G’s “for a very short time” before a person would start to black out, Elizondo said.

“These things that we were observing were pulling 400 to 500 G’s,” he said. “They don’t have engines or even wings, and they are able to seemingly defy the natural effects of Earth’s gravitational pull.”

Some of the UFO sightings reported to AATIP were eventually resolved, as aerial drones or test firings of new types of missiles that were spotted from an unusual angle. But while many astonishing UFOs still defied explanation, there simply isn’t enough evidence to suggest they belonged to extraterrestrials, Elizondo added.

However, another possibility is even more unsettling than the prospect of an alien invasion: that a foreign adversary had secretly developed technologies that are “strategic game-changers,” unlike anything ever seen before, he said. Addressing that potential threat is a necessary step that government officials — even those that supported AATIP — don’t take seriously enough, according to Elizondo.

“We trust the American people to know that North Korea has nuclear warheads pointed at Los Angeles, yet we don’t trust them with the knowledge that there’s something in our skies and we don’t know what it is? That seems counterproductive to me,” Elizondo said.

Are UFOs a Threat to National Security? This Ex-U.S. Official Thinks They Warrant Investigation

Chris Mellon believes the government should more aggressively gather intel on military UFO sightings, some of which were captured on video.

Throughout his distinguished government career, Chris Mellon has been keenly focused on the prospect of unconventional national threats. Now he works with a civilian group called To the Stars Academy of Arts & Science, trying to prod the U.S. defense and intelligence communities to investigate reports of unidentified aerial phenomena (UAPs—also known as UFOs) that maneuver in ways that have no known precedent.

He’s inspired, he says, by the growing number of such sightings in sensitive military contexts—reported by highly trained, highly credible witnesses and corroborated by some of the world’s most sophisticated technology, including several infrared videos shot from fighter jets. He doesn’t claim to know what these unusual crafts might be, nor does he assume they bring “aliens” from afar. To him, they signal a potential high-level strategic threat of unknown origin—one the nation would be foolish to ignore.

Mellon is uniquely qualified to assess such threats. Having served as Deputy Assistant Secretary of Defense for Intelligence during the Clinton and George W. Bush administrations, and later as Minority Staff Director of the Senate Intelligence Committee, he was heavily responsible for reviewing agencies and budgets involved in top-secret “black programs” related to things such as special operations and nuclear weapons. Mellon is now an integral part of the investigative team featured on HISTORY’s “Unidentified: Inside America’s UFO Investigation.” We talked to him about what’s happening—and what he thinks should be done.

What is really motivating me right now, what really has accelerated and solidified my interest, is the [2004] USS Nimitz case—when I learned of that and began to talk to the military personnel involved. We had multiple naval aviators [reporting] what they saw [wingless UFOs, with extraordinary capabilities] in broad daylight, over an extended period of time. It was corroborated by the most sophisticated air-defense sensor systems on earth, and on multiple platforms operated by multiple independent individuals. So when you start talking about that level of evidence, I think any reasonable person would have to say—this is real, and we should proceed accordingly. 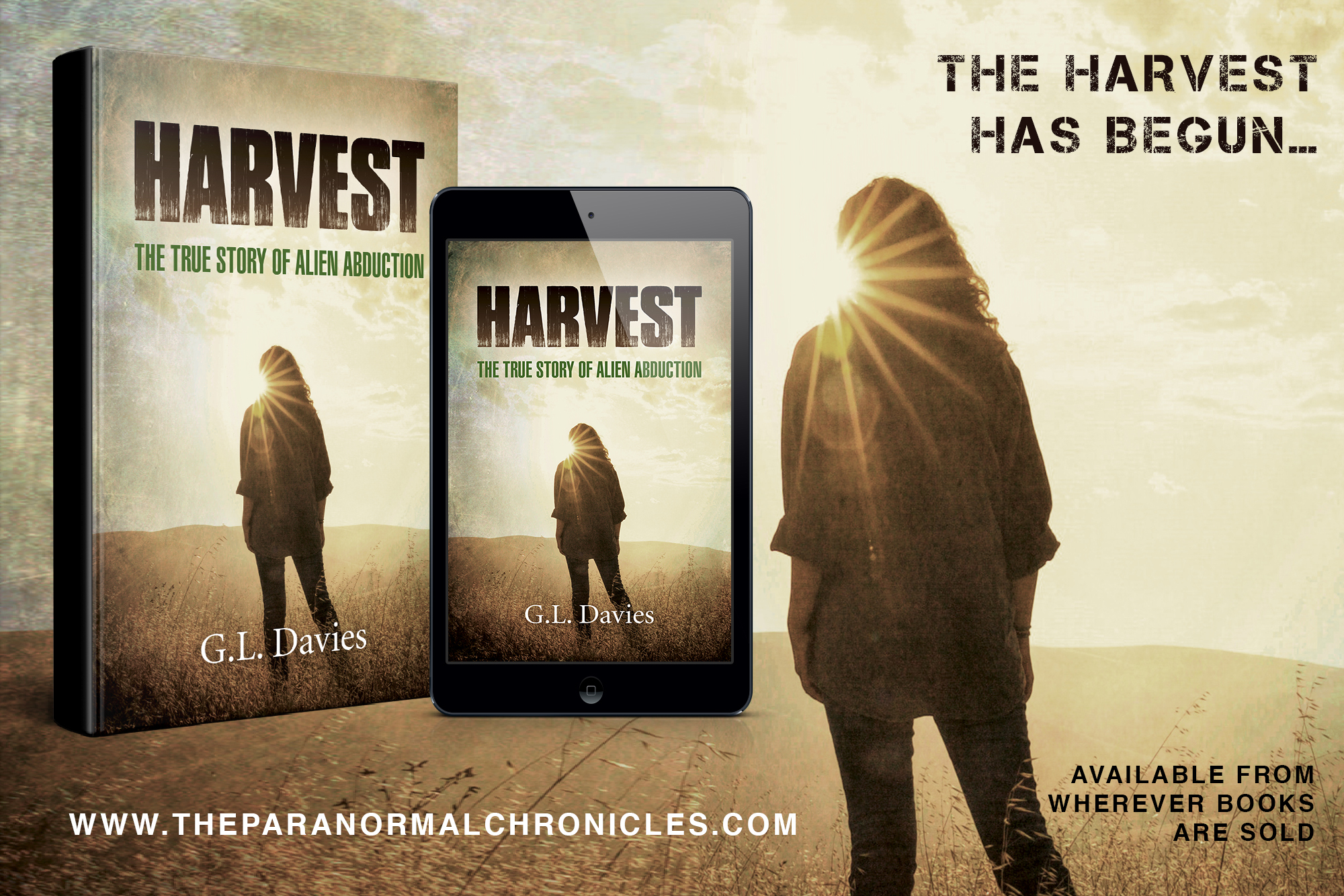